I heart the park. 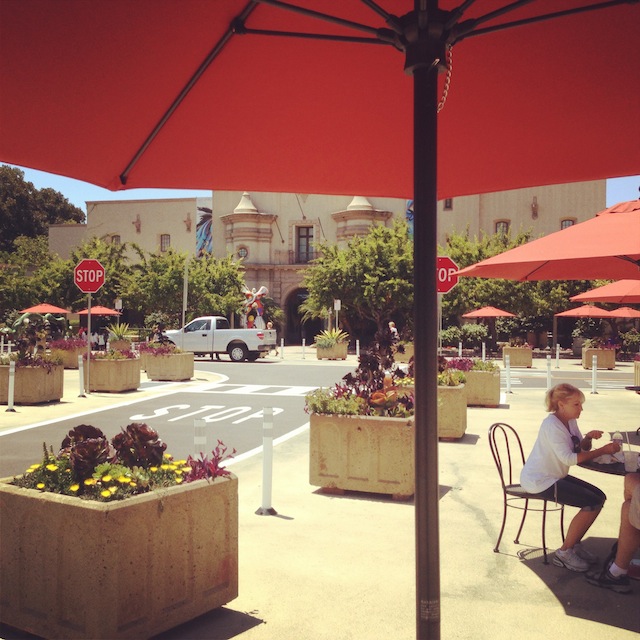 I was going to talk about something else this week, but a spur of the moment decision has led me to profess my love for Balboa Park instead.

Here's how it started: A friend of mine, who has lived in San Diego for more than a year, recently confessed that she has never been to Balboa Park. She is missing out. And you are too if you haven't been. Isn't that a thing floating around on social media these days, FOMO? Fear of Missing Out? Well you don't need to worry about FOMO anymore because it has been confirmed by me: You are missing out.

Balboa Park is such a special place. Today I had lunch on the Plaza de Panama, which is now a car-free zone. In addition to scrapping the valet parking lots, the Park has set up bistro tables and chairs with festive red-orange umbrellas. These changes are generating a bit of controversy, I'm afraid; but I like it. The space feels much more peaceful now. And it is just about the loveliest place to have lunch. Especially when you are cooped up inside all day at work (like most people). 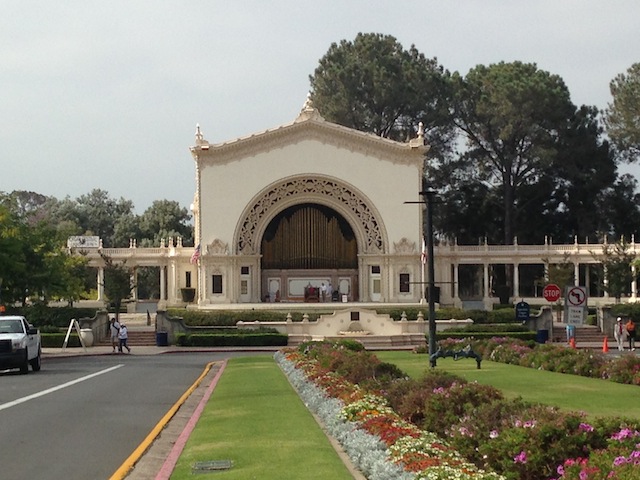 Another reason I love the Park is Spreckels Organ Pavilion. The name does not do the place justice. It is waaaay cooler than it sounds. On Monday morning, they were playing a rendition of "The Star Spangled Banner." I'm a sucker for patriotism in small doses. (I get that from my father.) That little performance helped me start my day off on the right foot. And tonight there was a Beach Boys cover band playing complete with a large picnicking crowd. Now, this is the kind of community I want to live in. A community gathering together to dork out to the Beach Boys at an organ pavilion amphitheater while picnicking. Did I mention that these concerts are happening all summer long and are free of charge?

And don't get me started on the museums. Balboa Park is chock full of great museums. All of these museums are free on a rotating basis to San Diego Residents and active military members.

Here is just a handful of events and exhibits happening right now in the Park:

The San Diego Natural History Museum (aka theNat), is a big gorgeous building with four stories and lots of stairs. I love their bug and photography exhibitions.

Tomorrow evening, the San Diego Museum of Art is hosting another Culture & Cocktails event. These  events are fun, but this one includes an optional sleepover at the Museum and ends with sunrise yoga! Details here.

Back in December, my mother-in-law and sister-in-law stumbled upon the Instruments of Torture exhibit at the San Diego Museum of Man. They are still thinking/talking about it. Also, their skateboarding exhibit generated a lot of buzz last year.

The Museum of Photographic Arts (MOPA) is celebrating 30 years in Balboa Park with 30x: Three Decades. MOPA is constantly offering lectures, showing films, and hosting live music so be sure to check in with them often.

Mingei International Museum has some really exciting pieces on view right now. If you are into interior design/furniture design/woodworking/metalworking, they have an exhibit and an event for you.

Timken Museum of Art just posted on Facebook that attendance at the Museum was at an all-time high last month thanks in part to the changes out on the Plaza. (Yay for them!) In my opinion, the Timken is the best keep secret in the Park. It's completely free every day. Also, it was modeled after the National Gallery of Art in DC and that exactly what I thought of when I walked through their doors for the first time.

The Reuben H. Fleet Science Center is the best place to catch an IMAX movie or to revisit the fun part of high school physics class. It's like that day when you went to an amusement park to do research on velocity minus the rollercoasters.

And you know how I feel about the San Diego Zoo.

In conclusion, Balboa Park is San Diego at its best and you should go there as soon as possible.
Email ThisBlogThis!Share to TwitterShare to FacebookShare to Pinterest
Labels: san diego, san diego museums, west coast museums
NEWER POSTS PREVIOUS POSTS