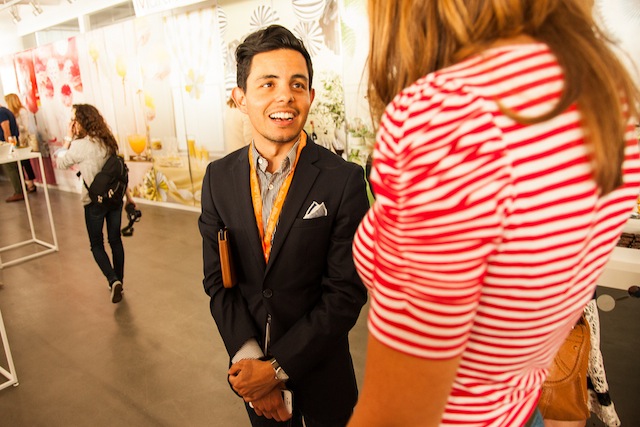 In May Vivint hosted a contest on their blog, The Neighborhood, offering one lucky blogger the chance to attend the sold-out Alt Summit NYC conference. And you'd never believe it, but I won. I actually won. It was so hard for me to believe it, in fact, that I didn't tell anyone except my family for a long, long time. I was worried I would jinx it. I thought it was too good to be true. But it was true, and I got to go.

Side note: I toyed with the idea of calling this post "I'm a Winner! I'm a Winner!" instead. But that wouldn't be very good for SEO.

Besides the fact that I got to go to a fantastic dinner at abc kitchen, attend a blogging conference and roof-top after-party at Martha Stewart Omnimedia, and listen to some amazingly charming speakers, the very best part was meeting new people. And that was the part that I was most nervous about.

Lots of folks have done recaps in the eight weeks since we met in New York. They are funny and wise and so on point, I can't possibly top what they have said. So I'm not going to try.

But here's a few tidbits for future conference-goers from me:

It is okay to be the newbie on the block. Everyone else was there at one point. Try to own it. (I didn't and wish I had.)

Bring business cards. Whatever you've got, bring them. But not too many, like PJ says. It's like keeping up with the Joneses at Alt Summit with business cards. Yours will never be as bright and shiny and creative as some (most) of the ones you see. And that's okay. You are among your people. Celebrate their strengths, coo over their business cards because they really are that amazing. But just know that it's okay if yours aren't. Really. It's okay.

Wear something you feel comfortable in. I wore crazy bell bottom pants and stripes. (The 70s is my style era, if I have to pick one. Minus the polyester.) Do NOT read the tweets leading up to the event about what people are wearing. They will undo you. Picking out an outfit for Alt is like picking out one for the first day of school, but on a much bigger scale and it is much, much worse. So just wear something you feel comfortable in. And by this I do not mean work out clothes. I am not giving you permission to wear Lululemon.

Bring only the bare minimum with you and bring an extra bag. My bag was SO heavy by the end of the day. It cut off circulation. And it kept me from having as much fun as I could have had.

If you see something, say something. If you see a blogger you admire, say hello. Don't walk by them and smile and hope they will say hello to you because it probably won't happen. And then you will feel sad.

And that's all folks. Conferences are amazing, but I am going to respectfully disagree with Grace Bonney of Design Sponge because you really can't share the experience of being at a conference with people who aren't at the conference. The advice you got there will be out of context anywhere else. So you should go to as many conferences as you can and be super jealous when your co-workers get to go to them without you. (By the way, Grace's keynote speech was awesome and you should feel jealous that I got to be there to witness it.)

A HUGE thank you to Tiffany Compton at Vivint. Those folks at Vivint are about the nicest people you will ever meet. The Neighborhood is so helpful and practical. I suggest you check it out as soon as possible.

And lastly, thank you to Alison, Dru, MJ, PJ, Chris, Mim, and Tanya for being so funny and kind and warm.

Alt Summit NYC was truly one for the books.

P.S. As usual, photos of myself are in short supply. As far as I know, there are only three photos of yours truly at Alt Summit NYC 2013. The first is from abc kitchen and I have a chocolate donut mustache. (Not suitable.) The second features Alison of The Knotty Bride and me and it is not a particularly flattering shot of either of us. And the last one I've used above. It was taken by Justin Hackworth and sponsored by Atly. That's me in my striped shirt.
Email ThisBlogThis!Share to TwitterShare to FacebookShare to Pinterest
Labels: #altsummit
NEWER POSTS PREVIOUS POSTS