DVF Celebrates 40 Years With an Exhibit Near LACMA 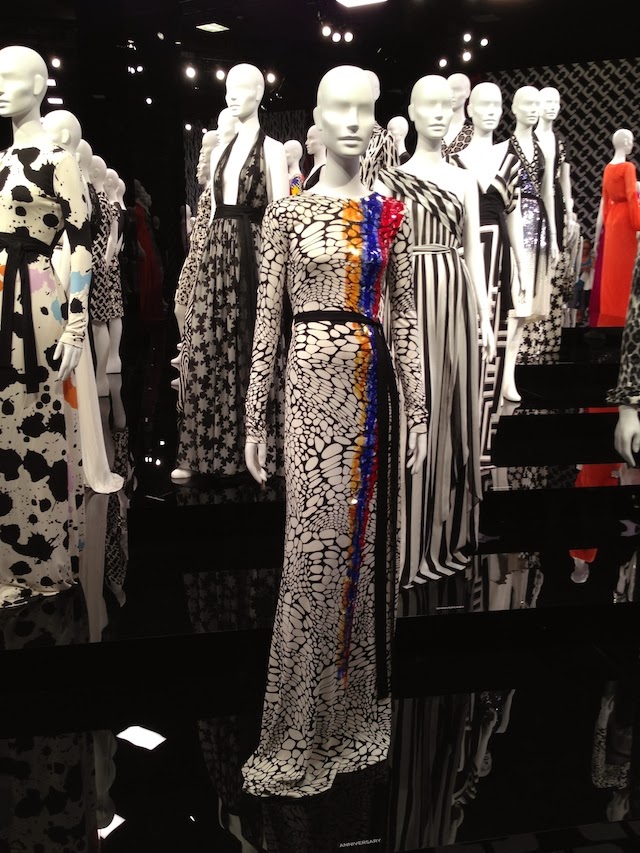 In this post, I will share two ways to go see Diane von Furstenberg: Journey of a Dress near Los Angeles County Museum of Art for free.

But first I would like to tell why you should go see this exhibit. In the interest of full disclosure, I must tell you that fashion exhibits are my favorite exhibits. And the majority of my party dresses are DVF. So my review of this exhibit is pretty predictable: It's pretty. It's fun. It's easy. You'll walk away lighter than when you came. And you can't say that about every exhibit you see because some exhibits force you to think a lot. (Sometimes too much!) Going to see this DVF exhibit is like watching a beautiful, romantic comedy. And I mean that as a compliment. (Speaking of beautiful movies, have you seen The American with George Clooney?)

Moving on to the good stuff.

This weekend is the first full weekend of a new month (March! Ack!), which means it's a Museums On Us weekend. If you don't know, Museums on Us is a trademarked promotion by B of A. If you happen to have a B of A or Merrill Lynch card, you can use it to get into over 150 museums nationwide this weekend for free. (LACMA included.) The promotion only includes general admission so it won't grant you access to special exhibits (like James Turrell), but it is still a very nice promotion.

Also, I just noticed on Twitter that LA residents can get free general admission to LACMA on weekdays after 3:00pm! How did I not know about this when I lived in LA?!? But now you know, so you should go and take advantage of it and I will live vicariously through you.

Diane von Furstenberg: Journey of a Dress will be on view through April 1. For more information on this exhibit head here and here.

And speaking of fashion icons, have you heard about the mother/daughter duo behind this blog?
Email ThisBlogThis!Share to TwitterShare to FacebookShare to Pinterest
Labels: los angeles
NEWER POSTS PREVIOUS POSTS